The Age-Old Art of Travel

Ever notice that travel guides seem to be speaking only to those who are on a “Gap Year” or spreading some wild oats before beginning their career after college? Or, they offer tours and travel hints for seniors, touting air-conditioned buses and wheelchair accessible museums. There is not much out there for middle-aged people who are between all night partying and breakfast buffets.

So, when, at fifty, my husband and I (along with our nineteen-year-old daughter) began to plan for a backpacking trip around the world for a year (which became two), we found out we had to take the guide books for twenty-somethings and tweak them to our own needs. Next week’s guide series is a result of learning the hard way and modifying the suggestions of the mainstream guidebooks. I think that George Bernard Shaw said it best when he stated, “Youth is wasted on the young.”

Choose to experience youth at any age! I don’t necessarily mean become old hippies who never grew up and put beads at the end of gray dreadlocks. Of course, if that is your thing, I’m not judgin’, but I am speaking to the work-a-day folks who worked a nine-to-five while raising children and now it’s time to start crossing items off the bucket list.

There is a glory of traveling light in the afterlife of children and family obligations that cannot be appreciated in the pre-children era of our lives. I hope that this series encourages an alternative travel style to what is normally offered to mid-lifers. There are the downfalls of bad knees and weak bladders but these these pitfalls can be circumvented with the right planning and preparedness. 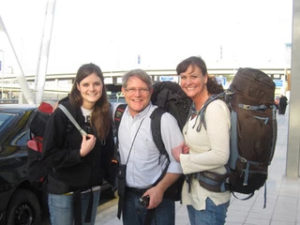 Get out there, it’s a big beautiful world, and it’s waiting for you,

P.S. Don’t miss out on The Seven Things Guide Books Don’t Tell You coming next week.

World Traveler, Author. She's been to nearly 40 countries and backpacked around the world.